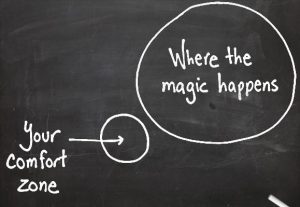 By now, you have hopefully seen the CFM Goals Program Introduction email and may have started giving some thought to what initiatives you may roll into your 2017 goals.  If you’re like most people, your previous goals have probably come about by a rather unstructured process.  They likely have involved little thought on what the right goals are, a lack of clarity regarding why you selected the goals, and committing to them without consideration of what is required to truly make a change.  Perhaps it goes something like this:

“It’s January. I guess a need a new goal for this year.

Wouldn’t it be super cool if I could, like, snatch a whole lot?

I will be a snatch monster.”

In the back of your mind, you probably had some vague notion that to reach this goal, you would do some extra snatch work at some time.  Maybe you plan to get pointers on technique.  Maybe you plan to do accessory work.  Buuuuuuttttt…..You probably won’t do it after the WOD, because you’re super tired then.  You also can’t come early before the WOD; there’s just not time for that.  No barbell at home.  Oh well, you’ll plan to get some extra work in sometime.  As the year goes on, snatch days come and no progress is made.  You realize there should be some concerted effort on your part, but now that the initial excitement has faded you realize you really don’t even have the motivation to pursue this goal.  Who needs to have a monster snatch anyway?

The scenario above has played out for me more times than I can count.  That’s because I used to rely on motivation to reach goals.  I usually expected to arrive at my goals without really having a plan on how I wanted to get there.  The CFM Goals Program is designed to help you break out of this pattern and develop a devotion to getting better every day.  Your coaches at Mudtown have a passion for seeing daily improvements in your fitness that result in daily improvements in the quality of your life.  This passion is the reason that promoting a goal-focused mindset is so important.  The program is more than writing a goal on the white board and never thinking about it again.  It’s about critically thinking about your goals, determining what an appropriate goal is, and putting a plan in place to reach it.  If you don’t intentionally pursue your goals, you are depending on reaching them by accident.

We all have a ton of things to focus on.  We can pursue countless efforts.  Let’s be honest, you likely have goals for your career, your family, your finances, and other areas of your self-improvement outside of CrossFit.  That’s why setting quality goals and prioritizing is so important.  As we all have limited time to pursue our fitness goals, we have to make sure the goals are the right one and that we have selected the top priority.

So why only one?  In our daily lives we have many obligations.  At work, it’s not uncommon for me to hear people talk about the top 5 or 10 priorities.  The fact is, until the 1950’s the word “priorities” was basically non-existent.  The only word that existed was “priority,” in the singular form.  Before the current pace of life took over, people seemed to understand that there could only be one highest-level devotion.  There could only be one priority in which you invested all your effort and focus.  Now, it is common for us to chase tons of things we consider priorities, and make a millimeter of progress in a thousand directions.  It’s time to stop.  Do less but better.  Focus on the critical few rather than the trivial many.  Select the single goal that will produce maximum impact on your fitness.  Your coaches and fellow athletes will be there to support you.  We will be there to remind you to put in the extra work.  We will be there to remind you why you’re doing this.